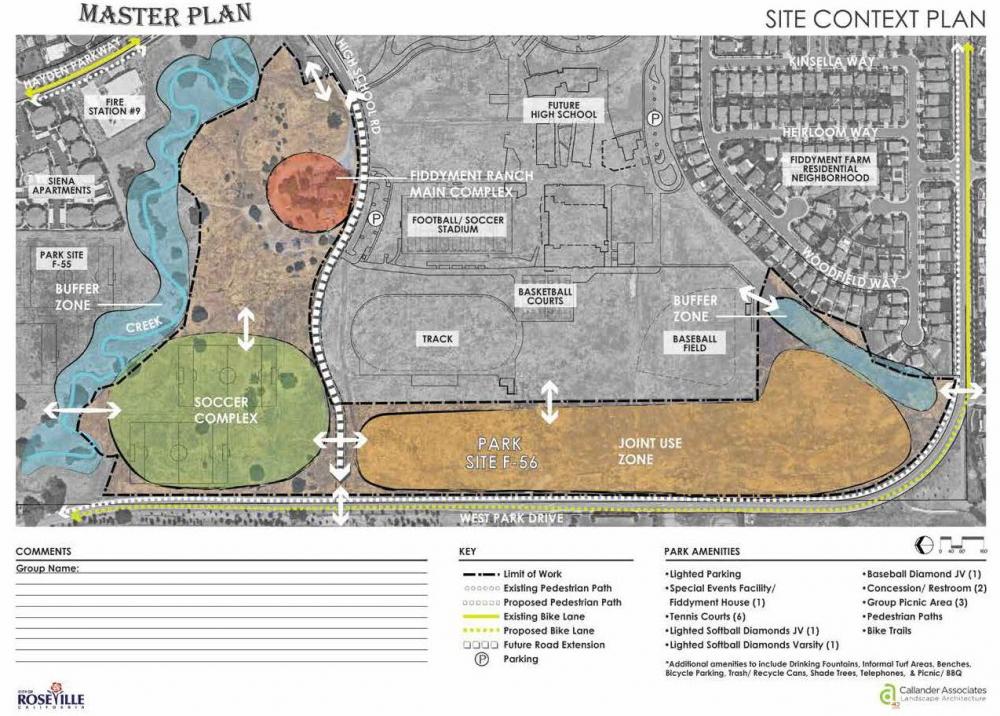 Roseville Parks & Recreation Department personnel and project planners gave updates at the 2nd public workshop for the project, located in Fiddyment Farm.  It will be joint use project with the high school for many of the amenities, and include restoration of the historical Fiddyment House.  This is a city-wide regional park created to serve a large community area; maintenance is usually provided through City General Funds for Regional Parks, but Tara Gee added “at this time”.   She presented the current concept plan created after the 1st public workshop (held May 4th) and indicated public comments should be submitted before July 13, 2017.  Then a Master Plan would be created and submitted to the Parks & Recreation Committee for review for approval, and then on to City Council.

Planning members took workshop members through the plan purposes and concepts, and showed photos from other park and historical type facilities that might be considered for similar use in our park.   Overall, responses from the audience members indicated a desire to keep the historical theme consistent with Fiddyment House throughout the entire park.  The number one priority concern raised by Christina Richter and other members from the Roseville Historical Society was the need for prompt attention to keep the Fiddyment House from falling further into disrepair.  Tara Gee indicated the Fiddyment House report indicated it would require about $200,000 to stabilize the property, stating “the money was not there [in the budget] yet.”

Amenities of the plan (which also showed some of the high school features), included:

The proposed F-56 Park Site Master Plan can be found on the Roseville website; comments should be submitted to TGee@roseville.ca.us by July 13, 2017.